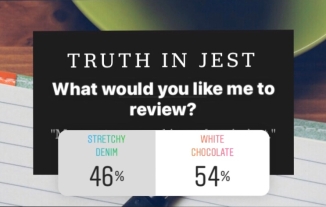 Thanks for voting this in as the topic of this installment of True Jest and all that but I’ve got no patience for pleasantries today. Let’s do this.

Counsel Bullock rises from the sturdy oak chair, re-positions the documents in front of him to perfect parallel alignment, then unconscionably tosses his ink pen haphazardly upon the stacks – chaos amidst order. He steps forward from behind the table at which he was seated, nods to the bench with respect, then turns to the assembly – a mild smirk upon his face. He was enjoying this.

What is chocolate? Is it simply a mixture of this and that – a list of ingredients, the combination of which creating a thing with a definition? Or is it more? What do you think of when someone says the word “chocolate?” Do you think of a flavor? Texture? Color? Is it fond memories drizzled over ice cream or chipped into a cookie? Or maybe you have the misfortune of an allergy or dishonest taste buds. Whatever your reaction, when I said the word “chocolate” just now, you had a vision – an emotional response and an inherent perception.

Ladies and gentlemen of the jury, today I hope to prove beyond a shadow of a doubt that white chocolate has been intentionally deceiving us for over 80 years – that, in fact, white chocolate is not chocolate at all but rather a cash-grab scam and an affront to our sensibilities and heritage. As we go on this journey, please keep in mind that I am not here to convince you of what to like or not to like – what is or is not tasty. I’m here to convince you that a ruse has taken place and that because of this, as a chocolate product, the rating for white chocolate can be no higher than 0. Thank you for your civic service and for your unbiased consideration on this matter.

Ok, so I don’t have “witnesses” to call per se but I’ve done like a little bit of research and am prepared to speak very passionately on my opinions…

What even is this shit? It contains ZERO % cacao, y’all. ZERO NIBS of cacao! What’s that mean to those of you without the specialized experience I possess? I’m glad you asked. It means that during the process of making white “chocolate” the manufacturers literally cast aside the part of the bean which gives chocolate most of its flavor and aroma and color. Think about that for a minute. That’s like if I was making burgers at a barbecue and asked you if you wanted cheese and you said “yes please” and I took a squirt bottle filled with whey and spritzed it all over your patty and called it “cheese mist” or someshit. It’s like if you asked me to bring muffins to brunch and I just brought the muffin stumps. It’s like paying for a massage and just getting the oily back.

Why do they call it “chocolate?” Oh, because it’s made with cocoa butter. Well you know what? So is lotion – so is makeup – so are hemorrhoid suppositories. Those ain’t chocolate either. Why else?… so confectioners can use the good name of actual chocolate to peddle byproducts as finished goods. White chocolate was invented in the 1930s as a way for Nestle to get rid of excess milk solids and cocoa butter produced during the production of chocolate. They replace the cacao with extra sweeteners and palm oil. Why do they hate palm trees? Why do they love deforestation? They even put vanilla in it sometimes! What type of bullshit is that? Chocolate don’t need vanilla – vanilla don’t need chocolate [claps hands together with every word]. Period-point-blank.

It wasn’t until 2004 that the FDA stepped in and started putting regulations around its manufacture that requires a minimum percentage of actual cocoa butter. Before that, y’all were just eating whatever confectioners had lying around that was white and edible. Still though, NO NIBS – not-a-one. Not a damned solitary nib located within.

While chocolate couldn’t be here today to testify, it did enter into evidence the following letter it wrote to white “chocolate” back in 1955.

Stop doing this to yourself, B. This is starting to get really embarrassing for you. It was kinda cute at first that you admired me so much and I was genuinely flattered for a while, but we’re not really family, bro. We’re like fifth cousins or something like that. You’re not going to be in the will. I hate to have to come off this way but you’re out here in these streets spouting off like you fam – like you come from where I come from. I’ve been building up this brand since the 1800s, homie! You just a pup. You’re a fad. What you know about Dred Scott? …huh? …The Civil War? World Wars I & II? The Holocaust? The Great Depression? Women’s suffrage?

You not like me, bro. Keep my name out’cha mouth.

You likely expected me to come out here and present an argument about how chocolate tastes better than white “chocolate,” which it totally does – without question and almost universally. However, by definition, an opinion cannot be false (though I disagree with that definition in this instance). My argument is that flavor is irrelevant to this case (though chocolate is SO MUCH BETTER). My argument is that white “chocolate” simply and utterly does not qualify as chocolate. Sure, it shares some similarities in texture and the faint hint of the mother bean conveyed by the cocoa butter. But insects fly and that don’t make ‘em birds.

White “chocolate,” here is my plea: Do you. Don’t try to be like chocolate or use its name. Just find yourself and be who you are. Honestly, you don’t taste bad. You’re sweet and you’re creamy and that counts for a lot. But you’re not chocolate. Stop calling yourself chocolate. Try something like “butter bark” or “creamfection” and stop this ruse. The prosecution rests.

This site uses Akismet to reduce spam. Learn how your comment data is processed.